I intentionally gave myself a connecting in LaGuardia so I could check out the Centurion Lounge over in Terminal B.

My flight was landing in Terminal C, so I had to go to a different building to get to the lounge.  I had to leave security to do this, but since the LGA lounge is outside of security, the only extra inconvenience was having to switch terminals.

There’s a bus that goes in between the terminals, and there was one outside the second I stepped out.  But because it was a nice day, I decided to walk over to Terminal B.

It was a rather short walk and I only had one near run-in with a taxi (which is pretty good by New York standards).  The path was clearly marked and it was a nice stroll.

But once I got into the airport, I had a heck of a time getting to the lounge.

Eventually I found a guy named Willy who showed me the secret short cut I could take down to the river.  There, I could secure passage down the river from his cousin, Clint.

I mean, it was on the third floor, but in an odd interior part of the airport that seemed to mostly contain security offices.  I commented that it was a “little more hard to find” than the other lounges and the woman at the check-in desk replied back with, “a little?!”

Once I got out of the hallway, the Centurion Lounge had a nice, calming interior and a fully stocked bar.

I arrived when it was still breakfast time.

There were salmon benedict and a tomato frittata. Plus french toast and pancakes. I love how the Centurion Lounges use Le Creuset cookware on the buffet.  There was oatmeal in a set of the pots staying warm too. There was also a selection of yogurts and fruits. I was surprised at how easy it was for me to find something I can eat there, given my new eating habits.

I got the salmon benedict, removed the muffin, and the frittata. I paired it with an orange-less mimosa.  (Okay, okay, sparkling wine, but let me pretend like it was appropriate to drink at 10am). The lunch options were being put out when I left and looked good.  They were also very friendly to what I can eat. And there was plenty of salad to go around. 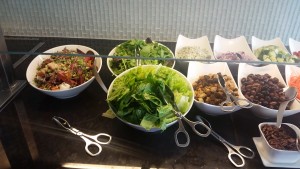 There also was a slow-cooked salmon dish plus a ramen noodles with mushrooms.

Despite being in a strange corridor of the airport, the lounge was great for plane spotting. The staff at the lounge estimated how much time I’d have to give myself to get back, but I ended up leaving early in search of an earlier flight.  (And also because a lot of the food I can’t eat smelled so good, I was afraid my willpower would crack 😉 ).

Former bartender, still a geek. One equal part each cookies, liberty, football, music, travel, libations. Stir vigorously. +Jeanne Marie Hoffman Jeanne on Twitter
Previous How to Get to Downtown Boston from Logan Airport for Free
Next Sometimes You Just Can’t Help from Afar

I love having Priority Pass, but more so than any other lounge access, I’ve come across …