How Babs Callahan Saved the Freddies

Okay, maybe saved is a bit much.  Strongly ensured the succe…. okay, okay, fine.  Made sure there were 20 red balloons at the event.

But who is Babs?  And how did she pull off such a heroic feat?  I’ll just let that cliffhanger dangle for a moment and get back to that.

After all, I am from the Bronx.

And indeed, I do know how to make things happen.

Who is Babs Callahan?  Babs Callahan is many people.  Put short, she is my virtual assistant(s).  I use a service called Fancy Hands, which allows you to delegate tasks out to a team who works on your behalf.  You have a file, so they have context for your tasks–and best of all, you get to name your assistant.

So I named mine Babs Callahan.

Usually, tasks get done within the hour, though some will take longer.  Each thing you ask them to do costs one task.  So if they reach out to make reservations and have to follow-up after leaving a voicemail, that is still contained within that one task.

But they added a new feature if you need something done immediately, Live Requests. Live Requests allow you to assign a task immediately to someone, and you pay per minute rather than per task.  Each fifteen minutes costs 1 task, and unused time rolls over to the next time you use a Live Requests.

So this can get expensive if you do not use it right, but is amazing when you really need immediate help.

So when I was asked to help get 20 red balloons, all I needed to do was:  (please excuse my autocorrect-ese) I later explained I had a preference for delivery if at all possible. I was standing in the lobby of the Monte Carlo with balloons.

Oh, and when I first got the request to help find the balloons, I was shopping at Sephora over in Planet Hollywood.  So I was able to coordinate this all on the go.

And the Freddies wouldn’t have been the same without it.

Well, this car wouldn’t have been the same without it. Well, it would have been the same.  It just wouldn’t have had balloons in it.

Babs has been a life-saver for me at times.  I was able to reach out just before I went through a tunnel when my Amtrak points disappeared (and I needed them immediately). 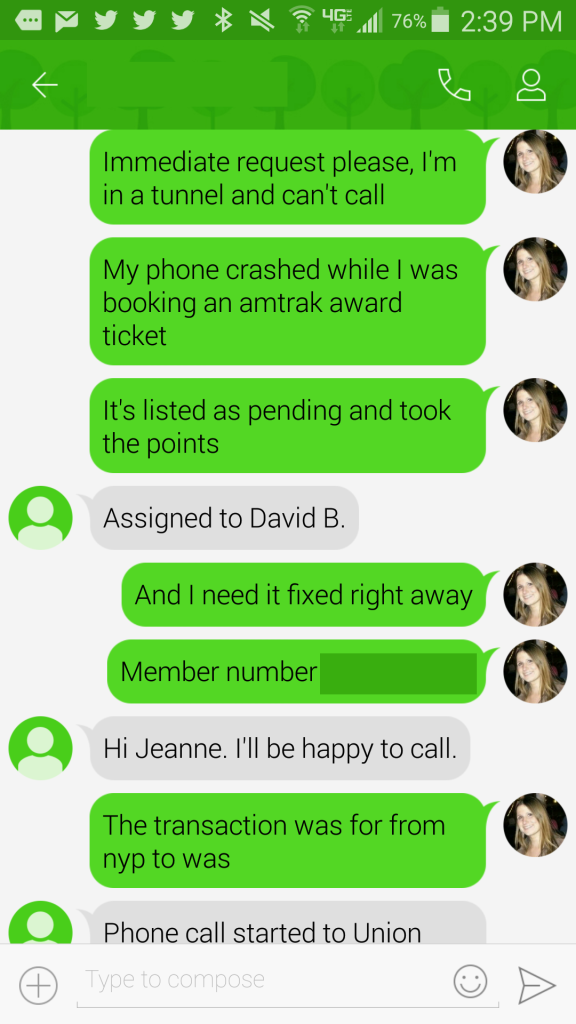 If you wanted to check Fancy Hands out, my link gives you a discount (and gets me a discount on next month as well).

Just know that for the most effective use of Fancy Hands (or Babs.  Or whatever you name yours.), you need to give context.

For example, I’ll copy this from old tasks when I want them to call Hyatt on my behalf:

“As an Diamond elite with Hyatt, I get some suite upgrades a year.  With these upgrades, I can change some of my reservations in regular rooms to be in a suite for free.  This depends on availability.  Last time I called, they did not have any available.  Could you inquire whether any upgrade space has opened up?  Make sure they know you are talking about a free diamond suite upgrade.  I am not interested in using my points to upgrade (which is another option).”

I don’t rewrite all my context each time — I have set stuff I copy and paste from my old tasks.  But I learned, for example, in the case of Hyatt, if Babs doesn’t know that a Diamond Suite upgrade is different from a points-based one, she won’t know when the agent makes a mistake.  Now, whenever I have her call on my behalf, she has the context.

I’ve found the service consistently useful for when I’m on the go.  If you find yourself short on time pretty often, I recommend checking it out.

P.S., this has been in my head non-stop since this task.