Jeanne Marie Hoffman May 16, 2015 Other Perspectives Leave a comment

Greetings, loyal readers of Le Chic Geek! I am Emily of “Taking a Sonic Screwdriver through TSA” fame. Being a travel enthusiast and geek, Jeanne has kindly granted me permission to share some of my experiences here.

A little bit about me: I have lived in seven different states and three non-U.S. countries. Thanks to this, I have travelled quite a bit and take just about any opportunity I can to go on an adventure.

Jeanne and I actually met in line for a panel at a gaming convention. I’m new to actively pursuing frequent flyer miles, but reading Jeanne’s posts over the past few years have inspired me. Last year, I went on a trip to New Zealand with my family (visited Weta and Hobbiton!) which gave me an active push to Gold with American. Since the merger was effected, Jeanne and I kept our eyes out to possibly do a mileage run together. We spotted a good deal to Seattle and decided we’d go out for May the Fourth, mostly because it amused us both to enjoy a little geek joke for our big run. During the weeks leading up to our trip, I did a bit of research and discovered the Star Wars exhibit at the EMP Museum. Not only that, but they were doing special events as part of May the Fourth Be With You. At that point, as Jeanne put it, it turned from a simple mileage run to a pilgrimage!

We had a hiccup at the start — our flight from IAD-CLT got cancelled while we were out enjoying some wine.  Thankfully, we had enough reception for Jeanne to call in and ensure we were rebooked; we were fortunate to be put on an IAD-DFW route instead.  This meant our first leg — the only leg of the outbound trip in first class — would be much longer and we’d end up with more miles, to boot.

My first time in first class will be a separate post; suffice to say that it was nice to have room. I volunteered to take the window seat; although I generally prefer the aisle, there were beautiful clouds happening and I wanted to see if I could get a few photos. We spent a little time at the Centurion Lounge in DFW before hopping on our flight out to Seattle. Unfortunately, due to a (re)ticketing SNAFU, we did not get placed into the emergency row for our one economy class leg of this run. Jeanne graciously fell on the sword and took the middle seat.

When we finally landed in Seattle, it was about ten hours after we’d left Jeanne’s house – and our day was just beginning!

We opted to be frugal and took public transit into the city, arriving in time for an early (for west coast)/late (for east coast) lunch. We ended up at a delicious Irish pub called the Blarney Stone with ridiculously tasty homemade potato crisps. If you ever get a chance to go, make sure to order the garlic aioli dipping sauce; it’s unreal. Re-energized, we decided to take a cheap Uber up to the EMP museum — totally worth it not to have to walk 1.5 miles uphill after a heavy meal.

As Jeanne wrote about already, the EMP museum was amazing. Between the Star Wars exhibit and all the other fantasy/sci-fi costumes, I was in geek costuming heaven. I won’t double-post photos, but here are some of the others I took — how many do you recognize?

(Note from Jeanne: I’m not sure why these are sideways.  When I go to edit them, they are straight.  I’ll try reimporting them again tomorrow.  Sorry for making you turn your laptop sideways!) Outside of the museum, we wandered around the corner to the Space Needle where I got my requisite shots. (Sorry not sorry about that pun.) We also peeked through the high hedges at the Chihuly glass garden; I love Dale Chihuly work but there was not really time to take in his museum. Maybe next time! Afterwards, we went to meet a friend of Jeanne’s and ended up in a bar while we waited. We drank (I had a local cider), we met some locals and ended up playing a hilarious game of Scattergories while waiting. Eventually we moved on for nibbles and snacks at a place called  The Whisky Bar, which had one of the most overwhelmingly thorough Scotch whisky lists I’d seen in a very long time. I ended up sipping a Glenfarclas 17 year, which was absolutely divine. They did not carry my favorite Glenfarclas iteration — the 105 cask strength — but the 17 year was a very adequate substitute.

We finally ended up at a Mexican restaurant called El Borracho, where we all ended up working on some cheap margaritas while we ate dinner. It was very tasty and seemed a bit appropriate on the eve of Cinqo de Mayo.

Finally, Jeanne’s friend offered to drive us back out to the airport, which was very much appreciated. We got to see a rainbow for a brief couple of minutes on the drive there. The return flights home were both in first class, which made sleeping a little easier. The flights were relatively uneventful, although the view coming into Charlotte was beautiful; I could see the skyline all lit up. We had some hassle with Uber when we arrived in Virginia — we summoned a car, which took far longer than reported to get to us, then he cruised past us despite the fact we were both waving and waiting where we said we’d be. When Jeanne called to sort it out, he promised to come right back around. 20 minutes later, his car in the app looked like it was doing donuts in the parking lot and he still hadn’t come back around to us. We ended up just taking a cab back to her house.

This trip was wildly fun and exhausting. It definitely meets the definition of “whirlwind”! I had an absolute blast, although in the future I’d like to try either staying a few nights or doing a more practical turn and burn.

Time to start thinking about my next trip… maybe Hawai’i! 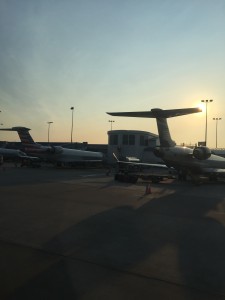 Former bartender, still a geek. One equal part each cookies, liberty, football, music, travel, libations. Stir vigorously. +Jeanne Marie Hoffman Jeanne on Twitter
Previous How Emergency Situations Can Lead to People Getting Stranded
Next Why Restaurant Managers Sometimes Lie to You and Why That’s Probably Okay What Are the Odds for My Baseball Teams This Season?

My favorite three MLB teams have the three best records so far, a third of …