I had the opportunity to learn about (and taste) American Airlines new first class menu offerings on Monday in Dallas.  Everything tasted slightly salty to me, but I’ll caveat that with two things:  1. I don’t tend to put much salt on food & 2.  We are on the ground.  I had the same experience with trying United’s menu on the ground and everything tasted fine in the air.  So I’ll avoid pointing that part out, but YMMV.

The new menu selections were inspired by restaurateur Sam Choy, a chef, restaurateur and television personality known as a founding contributor of “Pacific Rim cuisine”, who was present at the event.  He was also a contestant on Chopped, one of my favorite shows. with Oregano and Capers I wasn’t a huge fan of the vegetable accompaniment, but the burrata was very good and soft.  It had the proper consistency and I was (wrongfully) expecting it to be more mozzarella-like. This was really great.  The Béarnaise sauce was tasty and the beef was tender.  I could see the smashed potatoes tasting a little dry in the air, but I guess I need to fly to find out! This tasted just like sea bass.  I happen to not like sea bass, but it wasn’t fishy or dry or anything.  So it seemed successful. I was unfortunately & fortunately deep in conversation with the wine team when this one went around, so I didn’t get to try it.

This was really good.  The texture was great.  The mashed potatoes were tasty.  And I don’t like meat loaf!

with Olives and Garlic Mashed Potatoes These two were not avaliable for tasting, but I found out that the chicken is completely organic.  A lot of the inspiration behind the transcontinental menu is “farm-to-(tray) table”.  I think that’s an emphasis keeping with the times.

All of these menu options will be available in American’s transcontinental First Class cabins on flights from MIA-LAX-MIA, JFK-LAX-JFK, and, JFK-SFO-JFK beginning in July

There will be a new selection of snacks available in American’s Flagship Lounge beginning mid-July.  The idea behind these snacks is to be a tour around the world. These were just cool to eat.  They were available in yellow or purple and everyone scooped up the purple ones. It was an almost-play dough like texture I’m not used to, but it really worked.

I didn’t get a shot of this one, but it was a typical Italian crostini.  It wasn’t especially special but it tasted good. This tasted fine, but I probably wouldn’t be eating a lot of it in the lounge.  The noodles were a little difficult to eat when standing, so that may have biased me. The chicken was decently moist. 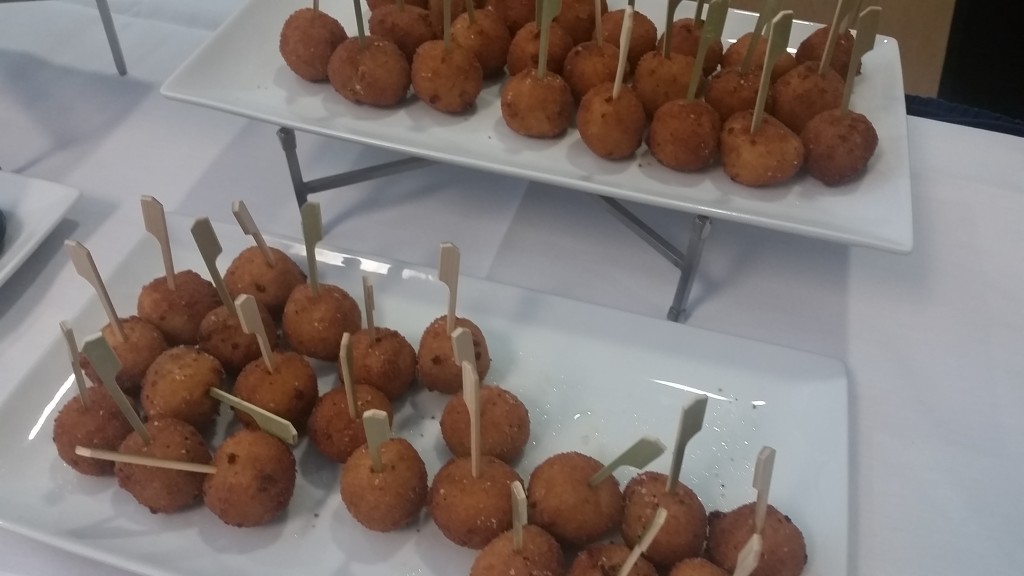 I loved this.  But according to View from the Wing, they are replacing it with three different styles of mac & cheese without the fritter part.

It’s a shame because it is so tasty.

I went back for extra portions of this one.

These new menu items will be available in our domestic class cabins in July. I loved this dish and was amazed that it is on the domestic first class menu.  The beef only required a fork to cut into it, so when it is potentially overcooked in the air, I think it will still be decently tender with a knife and fork.

I’m a huge fan of steak with lobster mac & cheese to begin with, so I could be pretty biased. This was also extremely tasty, but I can’t remember a time I had grilled shrimp in the air, so I’m not sure how it would translate.  (Everything I’ve had has been shrimp cocktail style shrimp).

I didn’t have the opportunity to taste any of the following. They are moving away from completely plating the salads to make it easier to offer vegetarian options.  So the salads will be served with the protein on the side. This was incredible.  These are pre-made sundaes for domestic first class (not transcon), so it isn’t replacing the made to order sundaes that you are used to.

There are pretzels on top and liquid caramel mixed in together with the ice cream. The menu definitely seems like an improvement on the ground.  I just can’t wait to try these items in the air come July and see how it compares when it’s on a flight.

Former bartender, still a geek. One equal part each cookies, liberty, football, music, travel, libations. Stir vigorously. +Jeanne Marie Hoffman Jeanne on Twitter
Previous When the Pilot Explains There Are No Empty Gates When You See Five
Next I Interviewed Amazon Echo’s Alexa about Jar Jar Binks. Here’s what she said.